Nine US Senators, led by Tom Udall of New Mexico, have introduced a joint resolution (Senate Joint Resolution 29, or SJRes 29) calling for a constitutional amendment to limit money in elections. It's presented as an effort to "Reverse Citizens United ," the 2010 Supreme Court decision expanding the never-intended constitutional free speech "rights" of corporations to spend money from their treasuries to influence elections -- without having to report it.

Citizens United resulted in an estimated $300 million spent on political ads in the 2010 mid-term elections, a four-fold increase from the 2006 mid terms. This is pocket change compared to the projections for the 2012 Presidential and Congressional elections. 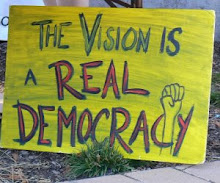 The recent explosion of corporate election spending and projected meteoric increase next year is likely major motives for this resolution. Another one is, no doubt, the rising chorus heard in the Occupation Movement that "corporations are not persons " -- short hand for a call to abolish corporate constitutional rights via a constitutional amendment.

Senator Udall and his resolution co-sponsors rushed to a solution without correctly determining the proper question.

It doesn't take 55 minutes -- or Einstein for that matter -- to figure out that our entire political system is and has for a very long time been fixed -- rigged toward the interests of wealthy individuals and corporations.

It basically doesn't matter:
-    How smartly we study and then prepare a glossy report on the dangers of the activities of (fill in the name of any major corporation here),
-    What animal we dress up as outside a corporate headquarters to protest an environmental destruction,-    How many constituents we bring to testify (to put a human face on the problem) on the impact of a particular corporate abuse to their communities before a regulatory agency,
-    What experts we hire to document that a tax cut to the super rich or corporations harms the economy and balloons the public debt,
-    What lawyers we hire to make the case that corporations shouldn't be able to hide behind 14th Amendment "equal protections" or the Commerce Clause to site their big box store or dump their toxic trash in our communities,
-    The number of call-in days, letter writing campaigns or email blasts we organize to pressure public officials,
-    Or even (I know this in the minds of many is scandalous) whom we elect of whatever political party to public office.

The bottom line almost without exception -- whether it's today, the day after the Citizens United ruling, or the day before the decision -- is that if the super wealthy and corporations will be seriously harmed by whatever bill, law, regulation, rule or decision the public wants, it won't happen -- short of massive grassroots organizing, sometimes over many months or years. If something is passed or decided, it's been so stripped down in depth, breadth or enforcement (i.e. the federal Dodd-Frank financial so-called "reform" bill is one classic example) that it's one half step above complete uselessness. Actually, such half-baked measures are worse than useless as they are proclaimed by proponents (from politicians to pundits) as real reform!

Our political system is fundamentally broken. On an unconscious if not conscious level, a majority of participants of both the Tea Party and Occupation movements know this.

Real democracy doesn't exist. It's a problem what goes back to when wealth and corporations first attained rights and disproportionate power -- which is basically at the beginning of our nation in the case of the former and more than a century ago in the later.
The root question Einstein might produce if he pondered this problem is: "Can we have anything approaching a real representative democracy in a society that defines money as speech and corporations as people with inalienable constitutional rights?"

If our answer is NO, then SJRes29 doesn't come remotely close to being a solution. Despite websites popping up with mastheads saying "REVERSE CITIZENS UNITED" and asking people to sign a petition calling for a "constitutional amendment to give Congress and states the authority to limit corporate and special interest money in our elections," the whole effort is inadequate.

How about MUST regulate.

And what about PROHIBIT raising and spending money by corporations?

Simply providing Congress with the option to address an issue doesn't guarantee that they actually will. Congress currently possesses the ability to take many actions but they don't.

Worse, calling for the "regulation" of raising and spending money by corporations in elections would legitimize never-intended First Amendment free speech corporate rights.  Free speech and every other right in our Bill of Rights were meant by its architects to be reserved exclusively for real human beings. Corporations were intended to be creations of the state with privileges, not rights, granted via charters by We the People through state legislators and, in the case of national banks, Congress.

The architects of this resolution didn't take the time to study and reflect. As a result, they didn't come up with the right solution.

The resolution effort is not completely useless however. If lucky, the resolution will receive one or more congressional hearings. These will provide important teachable moments to educate the resolution's supporters, other members of Congress and the public at large. They'll provide an opportunity to show that our political system, if not entire country, is broken because the political system is fixed. Finally, they'll represent an arena where real democratic fixes can be promoted, including the proposed constitutional amendment by Move to Amend  (http://movetoamend.org) which states, "We, the People of the United States of America, reject the U.S. Supreme Court's ruling in Citizens United, and move to amend our Constitution to firmly establish that money is not speech, and that human beings, not corporations, are persons entitled to constitutional rights."