One of the surprises about the Panama Papers – the largest leak from an offshore tax adviser in history – is how few Americans have so far been exposed. The reason? It may be because creating a shell company in the US is easier than obtaining a library card.

About 200 people with US addresses have so far been revealed as clients of Mossack Fonseca, the firm at the center of the Panama Papers leak. Compared with countries such as China, Switzerland, Russia and the United Kingdom, the number is small.

The anomaly may be because it’s so easy to create a vehicle to hide your money and your identity in the US that there’s no need to mess with Panama, according to Shruti Shah, vice-president of programs and operations at Transparency International, an anti-corruption organization.

“You don’t really have to go to Panama or other tax havens. They are not the only ones making it possible for corrupt officials and other criminals to launder their money. You can do it in every state in the US,” explained Shah.

“In every state in the US, you can incorporate an LLC – [a limited liability company] – or another legal entity and you don’t have to disclose who the beneficiary on it is. In fact, Delaware is so synonymous with anonymous companies and ghost corporations that it was named in Transparency International’s Unmask the Corrupt campaign as one of the most symbolic cases of corruption.”

The term tax haven usually evokes an image of some faraway place like Belize or the Cayman Islands. Yet in 2015, in a ranking of tax havens most attractive for those looking to hide assets, the US came in third – surpassing Cayman and Singapore. The two places that were even better suited as tax havens for the rich were Switzerland and Hong Kong, according to the Tax Justice Network that published the ranking. 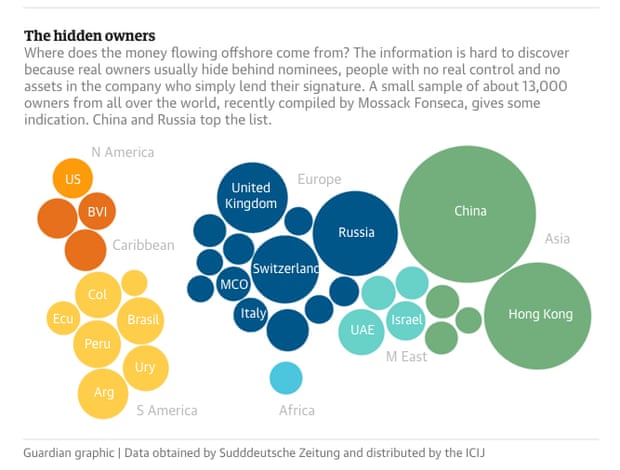 A while back, Shah sent her husband to return an overdue book she had borrowed from the library. When he returned, he told her her library card was expired and that to renew it she would have to bring her driver’s license showing her current address or a utility bill with her address.

Is this in every state or just some like Delaware where the majority of US companies are incorporated ? “No state in the US requires beneficial ownership information. So it’s practically everywhere,” explained Shah, who lives in Virginia. “Some states are easier than others. In some states it’s more money than others, because they also have tax-friendly laws. Delaware and Nevada and Wyoming are infamous – or famous, however you look at it – [for their tax laws]. Texas and Florida are equally easy.”

There is nothing illegal about setting up a shell company. US states are proud of their business-friendly policies. Delaware, for example, prides itself on being the incorporation capital of the US. “More than 1,000,000 business entities have made Delaware their legal home,” claimed the state’s Division of Corporations website. “More than 50% of all publicly-traded companies in the US including 64% of the Fortune 500 have chosen Delaware as their legal home.”

In the wake of the Panama Papers, the number of shell companies incorporated in the US could grow. Instead of stashing their cash in Belize, Panama or the Cayman Islands, the companies and individuals could turn to the US.

“They certainly could,” said Heather Lowe, director of government affairs at Global Financial Integrity. “Given the lack of action in the US to address this issue compared to, say, the European Union, it may seem like a safe bet right now.”

Shell companies have their uses; they can be used to buy land anonymously, for example, without tipping off the competition. To create an entity to protect future business rights, or a holding company for various businesses. They can also be used to, legally, make political contributions anonymously.

Just because some people or companies have chosen the state to form shell companies and hide assets does not mean the entire system should be to blame, argued Charles Elson, director of the John L Weinberg Center for Corporate Governance at the University of Delaware.

“Delaware really is not a tax haven. Delaware is a place where most US companies are incorporated, because of a very intelligent corporate law regime,” he said. “Obviously, some companies that are problematic come here, too, but that’s not the design of the system. That’s a collateral effect … If someone uses the corporation for nefarious purposes, I don’t think that’s the fault of the corporate statute, but of the individual.”

Shell companies, whether created abroad or at home, make it easy for people to hide assets and commit crimes, said Shah. For example, in the mid-2000s, former Louisiana congressman William Jefferson had created eight different shell companies to hide hundreds of thousands of dollars of bribes. Viktor Bout, an infamous arms trafficker known as the Merchant of Death, had at least a dozen shell companies incorporated in Delaware, Texas and Florida to cover up his weapons trafficking operation.

There is no reason, said Shah, why creating such shell companies should be easier than obtaining a library card. Her group Transparency International has called on the US Congress to pass the Incorporation Transparency and Law Enforcement Assistance Act introduced by congresswoman Carolyn Maloney and Senator Sheldon Whitehouse. If enacted, the bill would require states to collect, maintain and update information about beneficial ownership of all companies created in the US.

“Bipartisan legislation has been introduced in the House since 2008, but it has never seen the light of day. It’s never been enacted into law. Maybe now is the time,” said Shah.

Elson remains skeptical as to whether such a law would actually work.

“I don’t know how fixing the beneficial ownership rule would fix this. If someone is devious enough to game the system in this way, they would work their way around any single regulatory change. These are very clever people,” he said.

In order for any legislation to pass, the US business community would have to come out in support of it, pointed out Lowe.

“The US Chamber of Commerce has long opposed legislation to end anonymous companies, and they must reverse that position and begin to support honest and open business practices,” she said.